﻿can easily tell your life story or the stories of your life with a professional interviewer.  Steve offers a variety of personal, business, and church biographies on DVDs, as well as those for singular community events.  Click below to see what fits your personal preference and budget.

He spent many years doing public speaking and plenty of community theater.  When he thought he could do a better job than most of the DJs he was hearing, he went to a broadcasting school.  He eventually moved from music to radio news and then to television news.

In Kansas he won several broadcasting awards.  He enjoyed his work and friends in Virginia, Iowa, and Texas.  In Illinois he was a Host and Producer for P.M. Magazine.  Five of his stories aired nationally.

"Even though the network magazines were just starting," he recalls, "they didn't do features.  I believe I was the first reporter in the country to do a story about a new board game in 1984 that was becoming a national craze - Trivial Pursuit."  His interview with "Hints from Heloise" was another story seen nationally along with a third story about a man who built his own car from junkyard parts.

His most satisfying work was "Call For Action" consumer reporting in the Quad Cities and he's amazed at still being recognized for that franchise, in the early 90's.

His mother sent him an article in 2008 about a Kansas City anchorwoman transferring her skills to the Personal Historian field and he thought, "That's me!"

He loves all-things-England.  "In addition to trips around the U.S., I've been to London several times visiting relatives."  He was told by a News Director that because of his varied news experiences and travel, that "easily relating to other people's experiences and putting them at ease for an interview" is one of his best skills.

He looks forward to hearing your stories and, in a few, focused hours, having a video summary of your life. 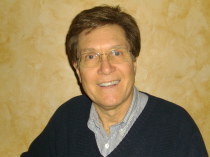